The ArchaeoSciences Platform within the Research Institute of the University of Bucharest (ICUB), currently implementing the “Sultana School of Archeology” initiative, announces the launch of the interdisciplinary archaeological research project “The dynamics of the prehistoric communities located in the Mostiștea and Danube valleys”, coordinated by the University of Bucharest, in partnership with Christian-Albrechts-Universität zu Kiel – CAU (Germany), HoGent (Belgium), Bucharest Museum, Lower Danube Museum Călărași and Museum of Gumelnița Civilization Oltenița (Romania), which is taking place from June 7 to August 27 2021, at Sultana, Călărași County.

The new project is coordinated by Dr. Cătălin Lazăr (ICUB, Romania), together with Professor Johannes Mueller (CAU, Germany) and Dr. Cornelis Stal (HoGent, Belgium). It proposes a multidisciplinary approach to prehistoric human populations in Southeastern Romania from 5500-3000 BCE, both in the broader context of Neolithic and Eneolithic civilisations until the beginning of the Bronze Age in the Balkan Peninsula, but also from the perspective of palaeoenvironment, palaeohydrography, palaeoecology conditions related to palaeoclimatic changes, in order to understand the diachronic processes (natural and anthropogenic) that marking the chronological time-spam approached. The project will involve systematic excavations in some archaeological sites (Sultana-Malu Roșu, Sultana-Ghețărie, Sultana-Valea Orbului and Sultana-Școala Veche – Călărași County), but also non-intrusive prospecting in the perimeter of other sites in the area, test surveys, and geo-spatial data surveys. Bathymetry and geoelectric surveys will be carried out in the waters of Lake Mostiștea, as well as aerial flights (UAVs).

The research team includes over 30 interdisciplinary specialists from various fields (archaeology, paleoanthropology, zooarchaeology, archeohtiology, malacology, archaeobotany, geoarchaeology, geography, geology, geomatics, archaeometry, digital and experimental archaeology), to which are added over 20 students from the universities of Bucharest, Ghent, Kiel, Cologne and York. In addition to field activities, during the project, several scientific presentations and a series of applied or experimental workshops will be organised.

The project “The dynamics of the prehistoric communities located in the Mostiștea and Danube valleys” will run for five years (2021-2025) and is probably the most extensive international archaeological project in Romania at this time. 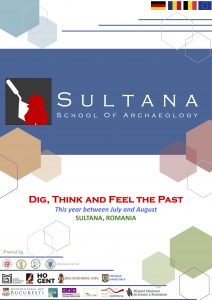