Thursday, 18th of November· 6:00  – 8:00 pm
Google Meet: https://meet.google.com/eek-rxfj-pdh
PIN ‪(US) +1 574-221-0089‬: ‪130 234 496‬#
In 1989, Romania had to reckon with three recent pasts, all characterized by a range of crimes. The December 1989 Revolution, the communist regime, and the pro-fascist rule of Ion Antonescu had each perpetrated gross human rights violations conducted by a distinct set of torturers against distinct groups of victims. Romania was not the only country where layered pasts competed for the attention of governments eager to reckon with recent rights violations. States in Central and Eastern Europe, the Former Soviet Union, Northern Africa, East Asia and other regions have had to right multiple past wrongs. How are these pasts reckoned with? Do governments always reckon first with the most proximate past? Do they pick and choose some pasts over others? According to which criteria and for which purposes? This presentation proposes several answers, drawn from the experience of some countries, including Romania.

Lavinia Stan is a Professor of Political Science at St. Francis Xavier University, Canada. A comparative politics specialist, she has published extensively on transitional justice, as well as religion and politics, especially in the post-communist space. She is the author or editor of fifteen books, including Encyclopedia of Transitional Justice and Transitional Justice in Romania (both published with Cambridge University Press, 2013), Religion and Politics in Post-Communist Romania and Church, State and Democracy in Expanding Europe (published with Oxford University Press in 2007 and 2011, respectively), among others. Stan is Past President of the Society for Romanian Studies, the premier scholarly association in the field of Romanian Studies. 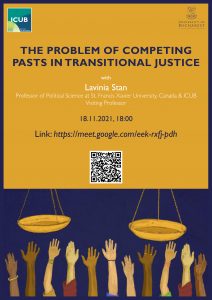