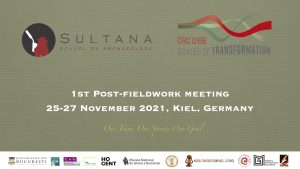 On 25th and 26th of November 2021, the 1st Post-fieldwork Meeting within the international project „The dynamics of the prehistoric communities located in the Mostiștea Valley and Danube Plain (between Oltenița and Călărași)”, coordinated by the University of Bucharest in partnership with Christian-Albrechts-Universität zu Kiel (Germany), HoGent (Belgium), Bucharest Municipal Museum, The Lower Danube Museum Călărași, Gumelnița Civilisation Museum Oltenița, and the “Vasile Pârvan“ Institute of Archaeology, Bucharest (Romania), took place at the University of Kiel (Germany).

The current project represents the most extensive international archaeological project in Romania. It aims at researching the landscape, climate and human settlements from V-IV millenniums BCE, and it is explicitly tracking the following:

During the event organised in Kiel (Germany), attended by scientists from Romania, Belgium, Italy, Ukraine and Germany, the first results of the Preliminary field research from the summer of 2021 campaign in the archaeological sites Sultana, Chiselet și Șeinoiu (Călărași, Romania) from the lower Danube region, were discussed. The meeting also aimed to draw up the publication plan and establish the field strategy of the 2022 campaign and deepen the cooperation between researchers within this project. The Romanian team was composed by Researchers of the ICUB ArcheoSciences Division (Cătălin Lazăr, Cristina Covatătaru and Bogdan Manea) and the international partners in this project (Adrian Bălășescu, Mihaela Golea, Vasile Opriș).

Also, on this occasion, a short presentation film was shot to promote the project, which was realised by the journalism team of the University of Kiel (Germany), and which can be viewed at this link:

The meeting was considered a success by all participants, the first results are promising, and the direction of research and collaboration between the project partners is clear. The project team’s next workshop will be in Bucharest in March 2022, and the whole team is looking forward to it.