Accountability is a crucial concept today, in both the state administration and public life in general: social justice movements explicitly reference it when they ‘demand accountability’ or call for those responsible ‘to be held accountable’. Surprising though it may seem, this idiom, in which political and judicial responsibility is associated with a notion derived from the use of numerical accounts, is medieval in origin: the Latin ‘computare’, ‘to count’ or ‘to reckon’, gave the name of the accounts, ‘computi’, used by late-medieval administrations – hence the French ‘compte’ and the English ‘account’ (via the Middle English ‘accompt’). The use of accounting records is one of the key developments of the later Middle Ages, and the way in which territorial officials and estate administrators were held accountable for the exercise of their duties was crucial for the functioning of institutions and the economy.

This project proposes a holistic approach to social and institutional accountability, focusing on two promising yet underexplored topics:

1) the role of the textual passages (notes, memoranda, and instructions) inserted in the accounts not merely to provide context for the numeric figures but, crucially, to define the parameters of accountability;

2) the relation between the use of accounts (‘computi’) in the state administration and in the domestic sphere, specifically as regards the family account books known as ‘livres de raison’.

These two research directions go to the heart of late-medieval social and institutional accountability, shedding new light on a cluster of central issues: the embeddedness of institutional and family accounts in a shared culture of accountability; the acculturation of increasingly large social circles to the standards of written accountability; and the role of credit as the point of articulation between institutional and personal accountability. The project brings together in an inclusive analytical framework both financial accountancy and accountability in the broader sense, in both the institutional and family realms, and with due attention to how numbers and text – that is, numeracy and pragmatic literacy – interact in the sources. To test this approach, the project focuses on an area of cultural contacts between France, the Empire, and Italy: the neighbouring counties of Savoy, Dauphiné, and Provence, whose shared history goes back to the eleventh-century kingdom of Burgundy. The scope of the project is extended to late-medieval Limousin, where a substantial number of ‘livres de raison’ have been preserved. 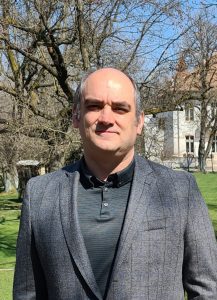 Ionuț Epurescu-Pascovici has a PhD in medieval studies from Cornell University. He is the author of Human Agency in Medieval Society, 1100–1450 and the editor of Accounts and Accountability in Late Medieval Europe.

Call for Papers: Medieval accountability: normativity, numeracy, and rhetoric from the institutional to the domestic sphere (University of Bucharest, 2-3 June 2023)