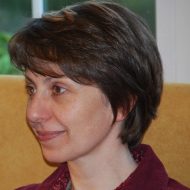 Diana Stanciu received her first PhD at the University of Bucharest (2004) and her second one at the KU Leuven (2012). She has been teaching and doing research at the University of Bucharest (1995-2009 and since 2015 onwards), the Central European University (1997-1998), the University of Athens(1999), the University of Cambridge (2000-2001), the University of St. Andrews (2006), the Ludwig Maximilian University in Munich (Humboldt fellowship 2007-2008), the KU Leuven (2009-2014) and the University of Oxford (2014-2015, 2017-2019). She was also a fellow of advanced studies institutes such as New Europe College, Bucharest (2001-2002), Collegium Budapest (2003), the Institute for Advanced Studies in the Humanities, Edinburgh (2006) and The Netherlands Institute of Advanced Studies (2006, 2008-2009). She formerly specialised in the history of philosophy with a focus on topics such as consciousness and conscience, grace, predestination, free will, virtue, sovereignty, rational religion and toleration. Since 2014 she has shifted to epistemology, cognitive science and practical ethics while concentrating on conscious agency, free will and moral decision-making at the interface of philosophy and neuroscience. She is the author of several monographs and edited volumes (published by Peeters, Brill, De Gruyter, Peter Lang and Bucharest University Press) and of numerous articles on the above-mentioned topics that were published in internationally peer-reviewed journals such as Zeitschrift für Antikes Christentum, Ephemerides Theologicae Lovanienses, Revue d’Histoire Ecclésiastique, European Review of History, Studia Patristica, etc. and in collective volumes issued by Springer, Mohr Siebeck, Oxford University Press, Brill, Garnier, LIT Verlag, Aschendorff, Peeters, etc.