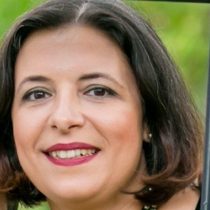 Silvia-Alexandra Ștefan is a Lecturer, PhD at the Department of Romance Linguistics, Ibero-Romance and Italian Languages and Literatures, Classical Philology and Modern Greek, at the Faculty of Foreign Languages and Literatures in the University of Bucharest. In September 2016 she graduated the PhD School of Literary and Cultural Studies of the Faculty of Foreign Languages and Literatures in the University of Bucharest, after having defended the thesis with the title Imitatio en la poética de Fernando de Herrera (1534-1597). The resulted book was published in December 2016 by Ars Docendi Publishing House in Bucharest. She also coedited the volumes El retablo de la libertad. La actualidad del Quijote, published in 2016 by the Romanian Cultural Institute in Bucharest and Literary Topoi, Vision and Techniques in Cultural Context. Proceedings of the Doctoral Session in Honour of Forty Years since the Foundation of the Chair of Portuguese (Faculty of Foreign Languages and Literatures), published in 2015 by the Publishing House of the University of Bucharest. She is founding member of the Ibero-American Studies Association in Romania (ASIR). Her main investigation interests focus on the Spanish Golden Age Poetry, History and Poetics Theory, as well as on their Medieval, Renaissance and Classical Antiquity sources.

From Famagusta to Lepanto: Spain between Cultural Inferiority and Imperial Aggrandizing

My study of the appropriation of literature by imperial ideology in sixteenth-century Spain focuses on Fernando de Herrera´s fascinating and unjustly neglected Relación de la guerra de Cipre y sucesso de la batalla naual de Lepanto (Seville, 1572). The Relación is a 200-page long history, still unedited, that recounts the wars between the Ottomans and the allied forces of Venice, Spain, and the Papacy, focusing on the siege of Famagusta and the battle of Lepanto (1570-71). Against the traditional interpretation of Herrera as a Petrarchan poet, I propose a novel reading of his works, and notably the Relación, as metahistorical and metapoetical propaganda aimed at legitimizing the mirage of Spanish imperial aggrandising. With this case study in cultural and national identity, I aim to contribute to the ongoing debates about how aesthetical narratives shape historiographical and ideological productions. My working premise is that certain dualities and oppositions, such as virtue-vice, courage-fear, heroism-prudence, underlie Herrera’s humanist discourse. A key component of my rereading is the assessment of Herrera’s treatment of the main sources of the Relación, so as to ascertain the main directions of his cultural-political agenda. The most significant anticipated result of my research will be a comprehensive analysis of Herrera’s Relación as a case study in the relation between cultural production and political propaganda, to be published in both Romanian and Spanish.